One of the Largest Life Insurance providers of North America, the customer is a leading provider of retirement and protection solutions, including fixed and variable annuities, and life insurance for individuals. With more than 8.5 million customers managing more than 20 billion dollars in assets, the company’s technology usage has evolved over the years.

Like any other large insurance companies, the customer has a large in-house IT capability, developing and maintaining a wide variety of internal systems to meet their business needs. As the growing need for staying ahead of the competition and to meet to the growing demands of the customers in getting things done quicker, better and faster and to adopt of industrialized methodologies and tools for developing software, the customer understood the importance of getting the guidance and support from those who has the expertise in doing so: WATI. The Business Challenges the customer faced are the reason why they selected WATI to provide them with a solution.

WATI’s consultants understood the business requirements of this customer from the technology, business and process aspects: 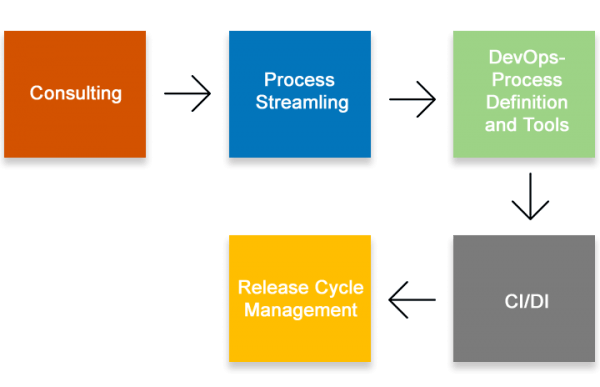 Keeping in mind the customer’s vision of “Creating a Practice that Automates the manually effort to do things better, quicker and faster.” WATI deployed a team of consultants to understand the development and deployment cycles of the different systems of the customer, spread across varied technologies.

The Approach that WATI adopted from the first day of starting this DevOps Journey is to work with the development team on ground to identify the challenge areas both from the Process perspective and also the technology.

This helped WATI consultants to define the road map better and to suggest the right tools, methods and manage the change effectively among the Project Manager, developers, testers, release managers, Infrastructure technology team and the DBAs. A custom solution approach based on industry best practices was adopted.

Change was not that easy as the internal IT team show a stiff resistance to change the way they do things. It is a change in mindset and culture that was required. The traditional waterfall methodology was followed across the organization for development and release of softwares.

WATI consultants were able to work along with the team of architects, developers and release managers and hand hold them with the new processes and tools to make them feel comfortable. Shown the benefits to the developers to focus more on their piece of delivery as the provisioning, integration, testing, compiling and deployment in to preproduction and production could be automated.

WATI consultants defined, created and executed DevOps strategy via a targeted, phased and iterative implementation plan. Worked with the team to Socialize and roll out implementation across the organization in step-by-step and managed the Organizational change effectively.

The Consulting solution delivered by WATI on the Organization Change Management for DevOps has brought additional productivity by using a common toolset, which can be used for both development and operations.

Download Now
Group Pricing - CISM Training
A SIMPLE GUIDE TO PCI DSS COMPLIANCE
WATI Cybersecurity Services
This website uses cookies to improve your experience. If you continue to use this site, you agree with it.